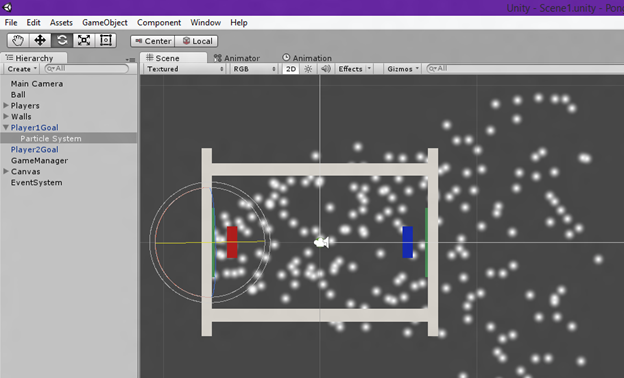 We’re now at the end of our fun, enlightening, and probably exhausting journey to recreate Pong. In this final part we will add polish to the game and learn a few more titbits of Unity wisdom before signing off on Pong (or whatever you’ve called your version). Then we’ll build a standalone version of the game that can run on any computer without needing Unity. If you have access to a mobile device, I’ll touch a little bit on building and deploying to those, but with so many platforms and other variables, it’s outside of our scope to go into detail about that.

We’ll add a few cool effects to our game to really up the fun factor. The best games have a lot of ‘juice’ – extra touches that make every frame addictive fun. Think of the Candy Crush clunk sounds or Angry Birds’ crashing, tumbling blocks. Granted, our Pong clone is not the height of fun or sophistication, but with these extra touches we’ll prove that even the simplest of games can be improved a lot by a few flourishes.

A simple, effective drop of juice is the camera shake. You see it in lots of games, and it gives a sense of kinetic energy, augmenting sound and vision to create something physical on a flat screen.

If you recall all the way back to Part 1 you may remember that our scene (and all scenes) has a default camera. You’ll also recall that all GameObjects (the camera is a GameObject) have a transform component, which determines its placement, rotation, and size. Therefore, if you move the camera’s transform you are effectively moving the view of the scene, or – from the perspective of the player – you’re moving the game area. If you quickly move the camera in small, random jolts, the screen will shake!

We will add a script to our MainCamera GameObject with a simple Shake() method, and we’ll call this method from GameManagerScript.

Create a new C# script called CameraShakeScript (remember to place it in the Scripts folder). Paste the following code into the script:

Open GameManagerScript. We’ll use Unity’s find method to get a reference to the camera to demonstrate the syntax a bit more, but you could just as easily use [SerializeField] and drag CameraShakeScript into the empty field in the Inspector.

Now, in Start(), populate the variable so it can be used in the script (place this line before the StartNewGame() call:

Now we can make the camera shake by calling the Shake() method on cameraShake like this, which you need to add to the GoalScored() method at the start, so the camera will shake whenever a goal is scored:

You can experiment with the shake by adjusting the Original Decay and Original Intensity variables via the Inspector. Can you modify the script to shake the camera every time the ball hits a wall?

Our particle effect is going to be rudimentary, but it will give you an idea of how particle systems work. We will display an ‘explosion’ of debris when a goal is scored.

Create a new ParticleSystem in the Hierarchy:

If you don’t see the particle system, double-click the new GameObject in the Hierarchy to centre the scene view on it. You may need to zoom in.

We’ll change this to make a few bits of white debris to fly off the goal when a goal is scored.

With the particle system selected in the Hierarchy you’ll notice it has a lot of settings in the Inspector:

Now we’re going to do something new. We’re going to ‘re-prefab’ our GoalPrefab. This means we are going to update GoalPrefab with changes we’ve made to one of its instances. To do this, drag-and-drop Player1Goal from the Hierarchy onto GoalPrefab in the Prefabs folder (you’ll need the Prefabs folder to be open in the Project window). Once you’ve done this the particle system will become part of the prefab, and Player2Goal will automatically get a matching particle system! That’s the power of prefabs, sir or madam!

Because Player2Goal is a carbon copy of Player1Goal the particle on Player2Goal will face in the same direction – but it needs to be facing the opposite direction, away from its own wall. To fix this, simply change Player2Goal’s Particle System Transform Rotation X value to 180 in the Inspector. This flips it on its X axis.

Before we can see our particles in action we need to fire it off at the appropriate time. Open GoalScript.

Then change the OnCollisionEnter2D() method to this:

Here we move the particle system to the same position as the ball at the moment it hits the goal, then play the particle emission at that location so it looks like some debris is being chipped off the goal by the ball. Snazzy.

For each of the player goal GameObjects:

We’re done! We’ve completed our Pong clone. It’s no masterpiece, but hopefully it has taught you the main building blocks of creating a game in Unity. If you look back through these ten lessons you’ll see that you’ve learned a lot, and hopefully some of it has stuck! You should have a pretty solid grasp of GameObjects, MonoBehaviour scripts, components, the Inspector, and so on, perhaps enough to embark on your own game.

There are also lots of ways to improve on our Pong clone. Here are some suggestions: