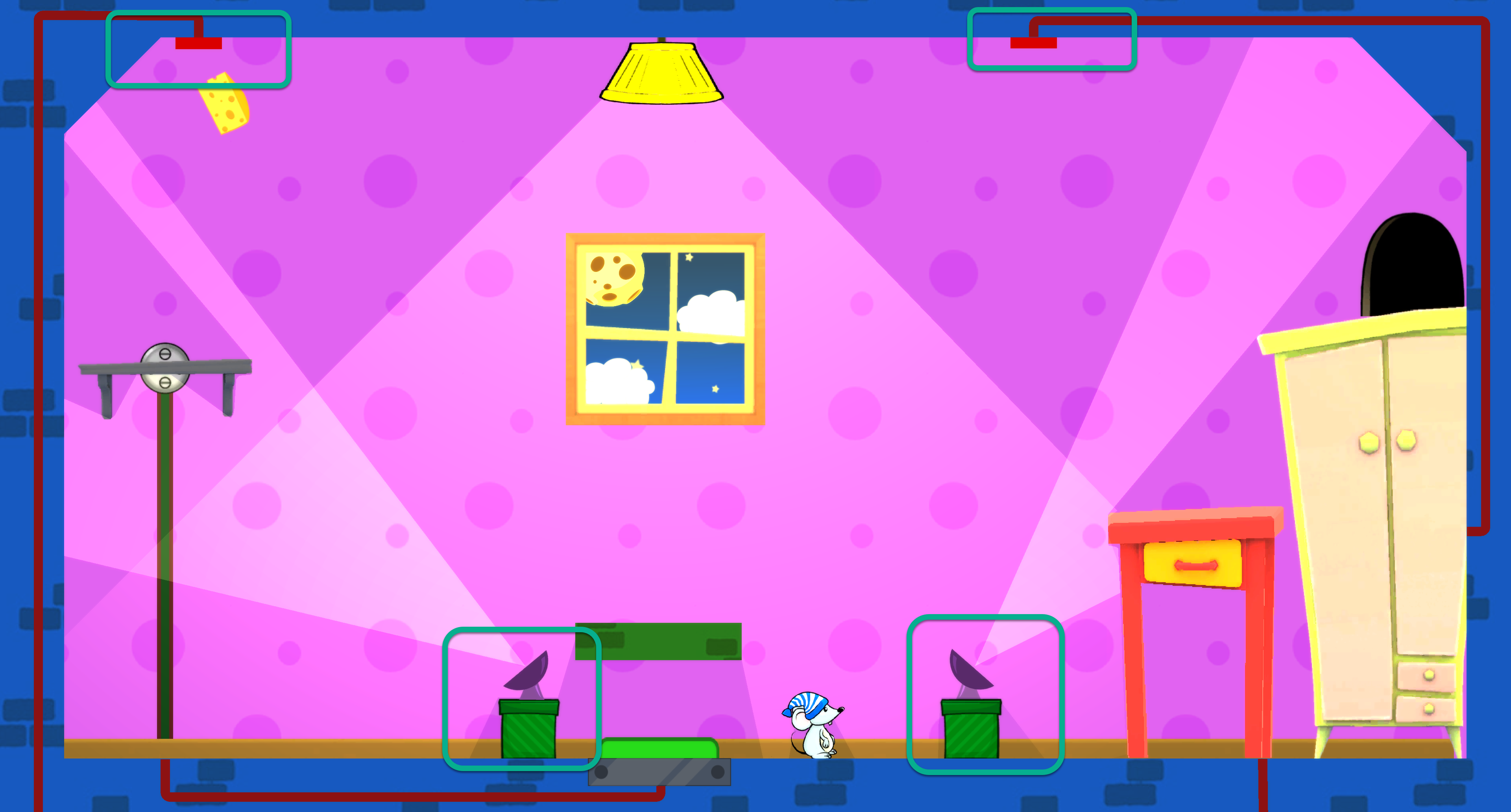 Once you have your puzzle mechanics chosen, it’s time to start designing puzzles using those mechanics. But before you can start creating puzzles you need to understand puzzles, how they work, and what makes them fun and challenging for players.

A puzzle is a challenge that needs to be overcome. Get to the exit, clear the board, answer the riddle, and so on.

Puzzles are overcome primarily via intellect (as opposed to physical skill). Imagine a game where the player flies a spacecraft through a level, shooting enemies until they reach the end. This is not a puzzle for two main reasons. The solution (shoot the enemies and avoid crashing) is known to the player (note: in a puzzle, the solution is not the same as the goal, whereas in a non-puzzle game the goal and solution are effectively the same thing). The second difference is that the skills required in this spacecraft game are physical – quick reactions and co-ordination, rather than the intellectual skills needed to solve a puzzle.

Further to these, it’s important that puzzles are fun or at least satisfying in some way. Something that separates puzzles from other aspects of a game is that a puzzle has a correct, hidden solution (though some puzzles can be open-ended with multiple possible solutions, such as physics-based puzzles).

So to define a video game puzzle:

A puzzle is a challenge with a correct, hidden solution that is solved primarily through intellectual skills, and is satisfying to solve.

The techniques and information in this article still apply to these exceptions in most cases.

Now that we have a definition for a puzzle, we can go one step further and look at what makes a puzzle engaging.

A player enjoys a puzzle by having a moment of understanding when they realise the solution. This is a ‘eureka moment’ – a satisfying realisation. The best puzzles cause these ‘aha’ moments for players. These moments make the player feel clever and satisfied.

Your job as a puzzle designer is to engineer ways to give your players eureka moments.

Let’s look at an example of this. In this puzzle from my game Mouse Dreams:

In Mouse Dreams, the player must get the piece of cheese, and then get to the level exit. The aim of this particular puzzle is to shine the light beams from the two green lamps onto the red light detector switches at the top of the room, and when both light detectors are lit up at the same time, the furniture in the room moves to allow the player to reach the exit.

The problem for the player is that the two lamps can’t be positioned in a way that will light both switches at the same time. For the lamp on the right to shine on the right switch, it needs to be move to the left of the green platform, which requires the left lamp to be pushed so far left that it can’t possibly shine on the left switch. Note: the player can push and pull the lamps along the ground, but cannot lift them up or carry them.

To solve this puzzle the player must swap the lamps’ positions so that the light beams shine over the green platform, allowing both switches to be lit at the same time. The box positions can be swapped by raising one of them on the moving platform on the left of the screen, and then pushing it over the other box.

Once the player figures the solution out, they will hopefully get the ‘aha’ realisation of a eureka moment. They will have found a way to overcome the apparent impossibility of the puzzle’s obstacle. The ‘aha’ realisation is that the player was trying to find a way to move the lamps to the right positions, and then realised that they need to think outside the box and use another aspect of the puzzle to solve the conundrum.

Further adding to the challenge of this puzzle is the game’s other objective – in each puzzle, the player must first collect the piece of cheese before they can enter the exit and finish the puzzle. In this puzzle, the moving platform on the left allows the player to reach the cheese, but they have to also place one of the boxes on the platform and stand on the box to give them enough height to be able to jump up to reach the cheese. The platform in this puzzle has two uses – to reach the cheese and to help switch the boxes’ positions. The use for getting the cheese is quite obvious…which in turn obfuscates its second purpose. The player will naturally overlook the moving platform when taking on the main puzzle. Also, because placing a box on the platform is required for reaching the cheese, the player is given a hint as to how to solve the puzzle – a slight push in the right direction.

To engineer these eureka moments, you need to start with the facet of your mechanic(s) that you want the player to discover. In the above example, the player is  learning that moving platforms can be used to manipulate the positions of objects that the player can’t physically pick up in the 2D world space of the game. So the process of designing this puzzle was to engineer a situation in which the positions of two objects needed to be switched to solve the puzzle. Once that concept is nailed down, the puzzle just needs to be built. Without going into too much detail, I just started by finding a way in which two boxes had to be in specific places to unlock the puzzle. I did this by going through my game’s mechanics to find a good match. Since lamps are directional (the light shines in a single direction), they were ideal for this puzzle because it mattered where they were positioned. The green platform was placed so that the boxes couldn’t possibly light up both switches without their positions being swapped. Finally, the solution of how to swap the box positions was added – the moving platform.

Once the player has had the eureka moment of learning this aspect of the mechanics, they will remember that they can use moving platforms to move boxes around in a way they hadn’t before, and can apply that to future puzzles that require similar manipulation of boxes.

To put this another way, your puzzles should be teaching the player to understand the mechanics of your game and their implications. It is this learning (or discovery) that makes the player feel those satisfying eureka moments, which is what makes solving the puzzles fun and engaging.