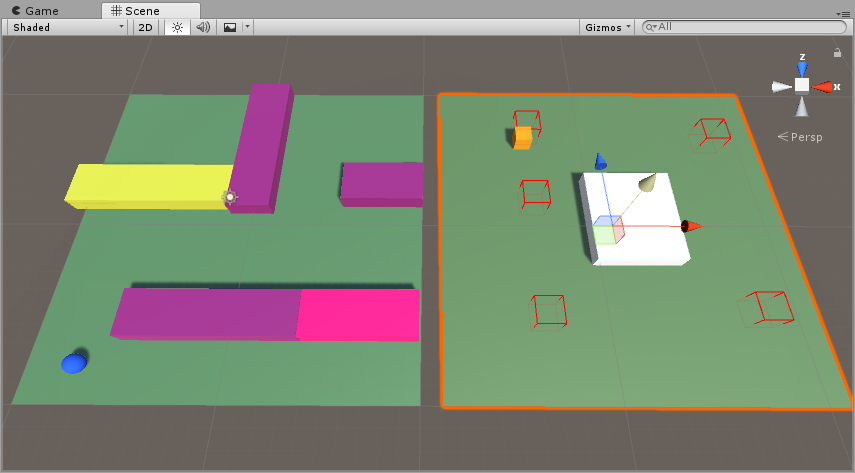 This tutorial won’t make any sense if you haven’t first done Part 1, Part 2, and Part 3.

And as with the rest of this series, you can grab a download of the full code as it should be at the end of this part of the tutorial at the bottom of this tutorial, so you can compare your own project.

Now that we’ve covered the basics of using the Nav Mesh, Nav Mesh Agent, and Nav Mesh Obstacle, let’s make better use of those tools to create something more game-like: an enemy.

We’ll create a simple enemy that uses the Nav Mesh for navigation, and has two types of behaviour – patrolling and chasing the player.

We’ll use our existing agent as our player, and create a new one to use as an enemy:

To start with, we will make the enemy chase the player, as this is actually simple to implement. All we need to do is set the enemy’s Nav Mesh Agent destination to the player’s position, and update it periodically.

We will build our enemy script in multiple stages, so you can either add in each piece of code as you read, or you can wait until the end of this section, where the whole script is listed.

That code simply tells the enemy to move towards the object it is following, and repeats this via InvokeRepeating every 3 seconds (this is a long time between updating the destination, but it is much easier to see the behaviour in action with a long delay).

At the moment the enemy constantly chases the player. This is OK for a simple demo, but let’s make it more interesting.

Let’s implement a rudimentary way for the enemy to catch the player. This will make the project feel a bit more game-like. We will restart the scene when the player and enemy touch, so add this code to the enemy script (and make sure to save the script).

Firstly, add the following to the top of the Enemy script:

Then add the following method in the script body:

Some versions of Unity have a bug that causes lighting to break when reloading a scene (this only affects the Unity editor – not actual game builds). If the scene goes dark when the enemy catches the player and restarts the scene, do the following to work around the bug:

Test the scene, and now the enemy will chase and catch the player, causing the scene to restart. f you want, add some extra code to the collision so something more interesting happens when the enemy catches the player – try adding some sound or making a message display on the screen.

In many games, enemies patrol. Our enemy will patrol between a few waypoints, and will switch to chasing the player if the player gets close. If the player then moves far enough away from the enemy, the enemy will resume patrolling.

Let’s create a simple waypoint script to make the patrol waypoints visible in the Scene window, which will make it easier to place them and visualise the enemy’s movement. Create a new C# script called Waypoint, and replace all the code inside with the following:

Any object with the Waypoint script will have a cube drawn at its position in the Scene window, which will be useful when setting up the enemy waypoints.

Now create all the waypoints in the scene:

Here are the waypoints in my project (the red cubes):

The enemy needs to know about the waypoints in order to move between them, so make the following changes to the Enemy script. Firstly, add a new array variable to hold all the waypoint positions:

Select the Enemy object in the Hierarchy and then go over to the Inspector window. In the Waypoints area, you need to enter the number of waypoints you have in the Size field, like this:

Now add references to the waypoints in the enemy script by dragging the waypoint objects from the Hierarchy into the empty fields in the Inspector, like so (do them in the correct order!):

The enemy needs to know when  to chase the player and when to patrol. For this simple example, we will use an enum variable to determine the enemy’s state, and determine behaviour based on its value.

First, we need to create an enum type and add it to the enemy script. Place the following code in the script. I usually put this sort of thing up with the variables:

Now, add the following variable to the script:

If you’ve not used enums before, you can think of them like a custom variable type that you specify the possible values for. In this case, a variable of type EnemyStates can only have one of two values: EnemyStates.Patrolling or EnemyStates.Chasing. The first value in the list is the default, meaning our enemy will start off in the Patrolling state until something changes that.

Let’s get back to the patrolling movement. We’ll keep it simple. The enemy, when patrolling, will move to the next waypoint on their route, and when they reach the final waypoint, will return to the first one.

Add a new variable to keep track of which waypoint the enemy is currently walking toward:

Add the following Update() method to the script:

That should be self-explanatory, but in a nutshell it updates the destination to the next waypoint when the agent gets close to the current target waypoint.

We also need to make a change to our chasing code, as the way it is done now would make the enemy try to patrol and chase at the same time! We need to make the chasing conditional upon the current state, so change the SetDestination() method to the following:

Finally, add this as the last line of the Start() method to initiate the patrolling:

The enemy script would not win any awards for great code, but it’s good enough to demonstrate the simple behaviour we need.

Test the level to make sure the patrolling is working. If the enemy moves to the first waypoint and then stops, try changing the 0.6f value in the Update method to something higher. You can also change the enemy’s current state to chasing in the Inspector, and the enemy will stop patrolling and chase the player instead. Try changing it back and forth. Great, now there are two states, but the enemy needs a way to decide which state to be in.

Since we’re more interested in the navigation, we’ll cheat with the AI here. We will have a couple of simple rules to switch the enemy behaviour:

We’ll pretend that the enemy can only hear or see the player when they are close.

Add this code to the Update() method before the code that is already in there:

Tip: You can add a gizmo to the script to visualise how far away the enemy can detect the player. Add something like this:

The value of 5 here is the radius, which should be half the distance used in the code that checks the distance between the player and enemy. The gizmo will appear as a wire sphere around the enemy in the Scene view.

That’s everything for Part 4. You should now have an enemy that switches between chasing the player and patrolling. The way this works and feels will depend a lot on the various values you use for everything, and there’s no better way to get it right than trial and error.

Here’s the full Enemy script including all the pieces from above: