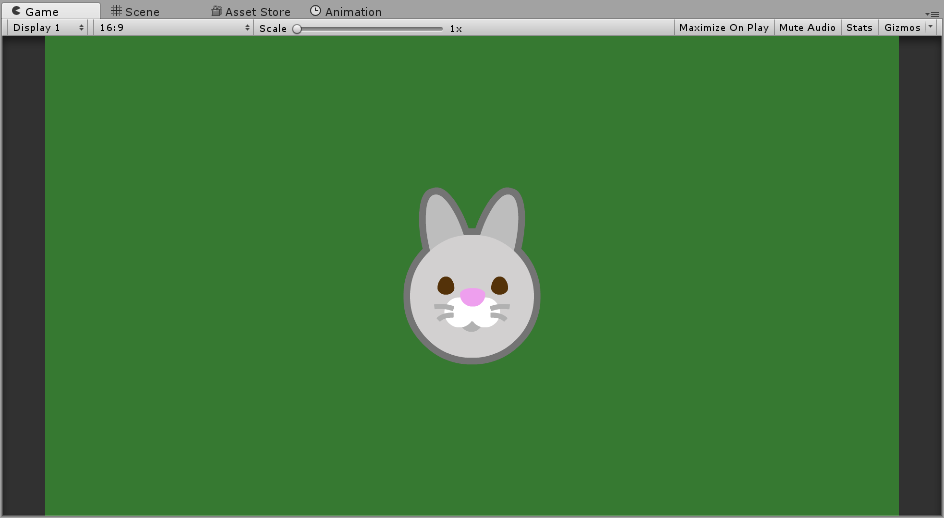 In this tutorial, we’ll make a player character move to a position on the screen where the mouse was clicked or a finger tapped, just like in real-time strategy games and many mobile games.

The steps required are:

The skills you’ll learn in this tutorial are:

As with all my tutorials, if you’re stuck on the basics, or I mention something you’re not familiar with (or just need more detailed steps), please refer to my Pong tutorial, where everything you need to know about using Unity is shown in detail.

I haven’t included any sprites with this tutorial, so find any sprite/image you want to use for your player. I always recommend Kenney.nl, where you can get lots of free art to use in your projects. In my example, I’m using a rabbit sprite from Kenney’s Animal Pack.

The player is going to be simple:

Here’s the Game window as it should look with your player:

Note
If you can’t see the player (but have definitely added a sprite), make sure the player’s Transform position is [0,0,0], which is the centre of the screen.

That’s all we need for the player.

Detecting a touch or click position is pretty simple, but has two components. You first need to get the touch position, and then need to convert that to an actual game position so that it matches with your game content.

Create a new C# script called ‘MoveToClickInput’, and replace the entire code in that script with the following:

Input.mousePosition also works for touch input, so we don’t need to write separate code to get a touch. More complex uses of touch can use the specific Unity APIs for handling touch and multi-touch.

The only thing this script does (so far) is check for a mouse click, then print a message to the Unity console window if one is detected.

Input.GetMouseButtonDown checks if the mouse button (button 0 in this case, which is the left mouse button or a touchscreen touch) was pressed down during the current frame. Be careful with these, as it’s easy to get mixed up between GetMouseButtonDown and GetMouseButton (which checks if the mouse button is held down regardless of when it was first pressed down).
Attach that script to the Player object, then test your scene. Click the mouse anywhere in the Game window, and you will see that a message gets printed in the Console window showing you that the code is working.

If you want to try it with a touch device, go ahead and deploy the project and test. It will work the same as with a mouse.

Let’s add a simple target sprite so we can see where the mouse click was (and therefore where the player will move to).

Here’s my red dot target drawn on top of the player:

Now, let’s give the input script a reference to the target, and move the target to the clicked position. Since this script is still very short, here is the entire script with the new code added in:

What we’ve added is a Transform variable called ‘target’, and a line of code to move the target transform to the position of a detected click or tap.

To assign the actual Target object to the target variable, go into Unity:

Now run the scene (but beware it won’t work as expected!)…

So you click in the scene, but don’t see the target appear where you click? That’s to be expected because the mouse position reported by Unity is not relative to the game screen. If you look for the target in the Scene window, you’ll find it very far away from where you actually clicked!

When you get Input.mousePosition, you are getting the position of the mouse in pixel co-ordinates, with [0,0] being the bottom left corner (this is called ‘screen space’). But when you are dealing with transforms in Unity, you are dealing with the ‘world space’, which is the Unity co-ordinate system with [0,0] in the centre, and has a different scale where a single unit represents dozens or hundreds of pixels.

So we need to translate the mouse position from screen space to world space to use it with transforms. Luckily, this is very easy:

The above code converts the mouse’s screen position to a game world position. The (Vector2) at the front forces the value to be Vector2 (rather than Vector3 default), which ensures the position is at [0] on the Z-axis, since we’re working in 2D.

Replace the script’s Update() method with the following:

Now run the scene and the red dot (or whatever you used) should move to where you click the mouse.

We now have a player and can detect a mouse click in world space. The next thing we need to do is make the player move to the click. This is not as simple as what wo did for the target object because we want the player to ‘walk’ to the clicked spot.

Let’s go through the code piece-by-piece, and I’ll include the final script at the end.

Firstly, we want to keep track of where the player is heading, so we add a script-level variable that will always remember the player’s current target:

We also need to give our player a speed so they move at the rate we want, so a speed variable is required:

When the scene starts, the player doesn’t have a target to move towards, so we set the target position to be equal to the player’s current position in the Start() method:

We should also rejig the code that gets the mouse position and moves the target so it uses the same targetPos variable that the player will move towards, so that will be changed to the following:

And after that code, still in the Update() method, we will do the real magic – move the player towards the targetPos:

The above code first checks if the player is already at its target position (if it is, there is no point moving it), then uses Vector2.MoveTowards to (you guessed it) move towards the targetPos from its current position. The third parameter of Vector2.MoveTowards is the movement amount, which is effectively the speed. We multiply our player speed by Time.deltaTime (the time since the last frame) to ensure that the movement amount is kept consistent with the framerate (the framerate is always going to fluctuate a little, so if the player moved the same amount every frame, it would change speed all the time and therefore move very roughly).

Try out your scene. You should now have everything working!

Here are some things you can try adding to improve this little project: