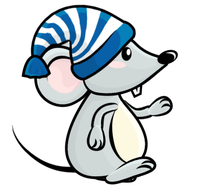 In this quick tutorial, I’ll show you how to modify a UI object when the player moves the mouse over it.

As always, if anything in this tutorial is new to you, refer to my Pong tutorial where I explain all the major Unity functionality in detail.

In this tutorial we use Event Triggers, which were explained in a bit more detail in the Input Manager tutorial, so if you want more detailed steps, refer to that tutorial.

Select one of the buttons in the Hierarchy so that its components show in the Inspector pane.

The ‘Highlighted Color’ property is the shading applied to the button when the mouse is over the button (or when the button is currently the selected button with keyboard/gamepad). Click in the Highlighted Colour box and select a new colour. Pick something obvious:

Now play the scene and move the mouse cursor over the button you modified.

The built-in mouseover behaviour is fine for simple use and prototyping, but in a game you usually want something more interesting. Using an Event Trigger, we can script anything to happen to the button when the mouse is over it.

Choose one of the other buttons in your scene this time so you can compare the difference with the button you already played with.

Put the following code in the script:

Your button needs to know when to call the code in the script, so we use an Event Trigger component to set up the events we want to listen to.

Now you need to tell the Event Trigger what code to call when these events occur.

You have now told the Event Trigger that when the mouse (pointer) enters this button, run the PointerEnter method on the MouseOverEventSctipt attached to the button’s GameObject.

If the MouseOverEffect methods don’t show up in the drop-down list, make sure the methods are public, and that you have saved the script.

Now run your scene and test that it is working. You should see text in the Console panel when the mouse cursor enters and exits the button area.

If that’s working correctly, you can move onto the next section where we will add something more interesting to the mouseover effect.

The basic functionality is all there now. You are detecting when the mouse is over the button and running some code when it happens. Now all you need to do is put something more interesting into that code.

Replace the two methods with the following:

Now test the scene (make sure you save the script first). You should now have something like this:

You can add any code here you like. You can also combine the built-in colour shading that Unity provides.

Since the button is quite generic, try replacing the button image, text, and font to create something that looks a bit more at home in a game.

There is no limit to what you can do to enhance this functionality and create interesting UI. Here are a few things you could try adding to your code:

The scaling technique I’ve shown above is very basic. You will probably want to replace it with a smooth animation. Look into ‘tweening’ to find ways of smoothly animating the scale so it looks slick and professional.