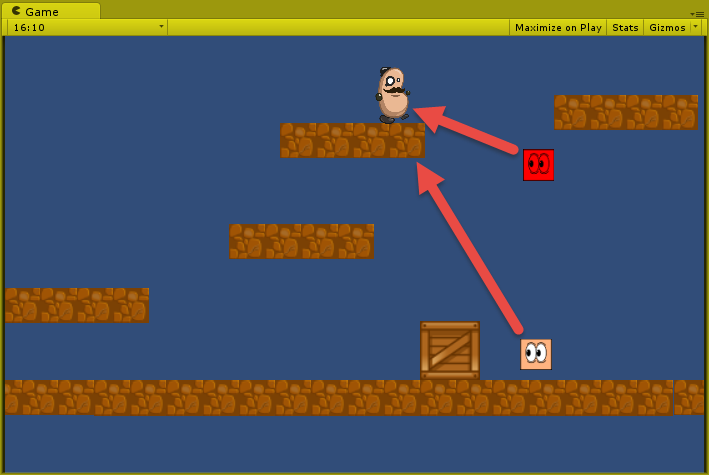 Enemies are more challenging when they have some intelligence. A great start to building enemy AI is to grant enemies the power of sight!

Sight is really a test that there is clear space between the enemy’s eyes and the player. With that knowledge it’s simple to work out a solution.

You can download the sample project at the bottom of this article to see it in action (and to get all the juicy code).

To simulate vision we need to distil it down to fundamentals. Vision has:

For a 2D game you can represent sight like so:

Now that we have defined what the enemy can see (i.e. anything within their range, in the direction they are facing, and not blocked by other objects) we can work on the code.

I chose to break down this problem into three steps, where each step relies on the previous one:

Now to code those steps one-by-one.

Is the Player within the Enemy’s Vision Range?

This is easy. Simply give the enemy a very large circle (or sphere in 3D space) trigger collider, and if the player is within this collider he is within visual range. Typically this circle/sphere would be many times larger than the enemy itself, giving it vision across a large part of the screen:

In the example linked at the bottom of this article I have a bool variable isPlayerInSightRange, which is set to true in the enemy’s OnTriggerStay2D() method, and set to false in the corresponding OnTriggerExit2D() method. The enemy script always knows if the player is (theoretically) within visual range.

I use a special collision layer for my vision collider so that it doesn’t get triggered by all the items in the level, since we only care about whether the enemy can see the player or not. This collision layer only collides with the player (set via the collision matrix in the physics settings).

Is the Enemy Facing the Player’s Direction?

If that angle is < 65 degrees we consider the player to be within the enemy’s line of sight. The angle is calculated via Vector2.Angle, which takes the two vectors as parameters and returns the angle between them:

Does anything block the enemy’s view of the player?

The final check sends a raycast (an imaginary line that detects colliders) from the enemy to the player and see if it hits anything else on its journey. If it hits something other than the player (e.g. a wall or a crate) then we determine that the enemy’s line of sight to the player is blocked and the player can’t be seen; otherwise the player is seen.

Physics2D.RaycastAll returns an array of all the colliders the ray touches on its travel from the enemy’s eyes to the player. If you look at the code in the sample project, we ignore any objects that are actually the enemy. If the ray hits anything else that is not the player we know that this object must be between the player and the enemy because the ray only goes as far as the player.

The third parameter of Physics2D.RaycastAll lets us specify how far to shoot the ray, and therefore the ray can’t detect items further away than distanceToPlayer in this example.

This technique works well, but has a potential flaw depending on the context. The ray is sent from the enemy’s eyes to the player’s location (which will typically be the centre of the player’s transform). This means the player’s centre must be visible/not blocked in order for the enemy to see him. If the player’s body is behind a crate, but his head is exposed, the enemy still can’t see him.

That’s how it works. Download the sample to see all of the code, and refer to the code comments and the theory in the article if you get lost. Of course questions and comments are welcome too.

In the example project I change the enemy’s sprite colour to red when he can see the player. You can see some debug lines in the Scene window as well, indicating where the enemy is looking. I recently did a post about using debug lines if you want a bit of background on that technique.

Here are a few ways you could adapt this method to suit your game:

6 thoughts on “Giving Enemies the Power of Sight!”