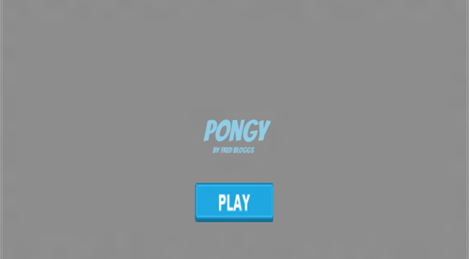 What’s on the Menu?

By the end of Part 7 we had a mostly feature-complete Pong clone. But there’s still work to do, and there are still lots of cool things to learn about using Unity. In this part we’ll dip our toes into Unity graphical user interface (GUI) features to display the score, create a menu screen, and do some other UI stuff.

The Unity GUI system works via a canvas. You add a Canvas object to your scene, and then add children to this canvas with text, buttons, and so on. The Canvas (along with its UI) is overlaid on your game screen to present menus, information, health bars, and so on.

Select the Canvas in Hierarchy and look at its contents in Inspector. You’ll see a bunch of stuff that Unity needs to draw the GUI. The most obvious difference is that instead of the usual Transform, GUI objects have a Rect Transform:

With Canvas selected in Hierarchy, add a UI | Text component in the Inspector:

You can copy the settings from the following image:

You will see the text in the Scene and Game windows. Pay attention to how it looks in the Game window rather than the Scene window, as the Canvas GUI view can be confusing at first.
To ensure the text stays the same size regardless of screen resolution, set the Ui Scale Mode field in the Canvas Scaler (Script) component to Scale With Screen Size:

Awesome. But of course we need that score to change throughout the game. Let’s do that now.

We need modify GameManagerScript to change the score text whenever the score changes.

Open GameManagerScript. Unity’s GUI stuff has its own namespace, which isn’t in MonoBehaviour scripts by default.

A namespace is a way for organizing code. Your scripts can only access code within their own namespace or in namespaces they explicitly include. This helps keep code modular.

To add the namespace, add the following code at the top of the script (you can see where it belongs as there are some other lines very similar at the top):

With GameManager selected in Hierarchy, drag-and-drop the Canvas GameObject onto the Score Text field in the Inspector.

This changes the GUI Text component to show the scores by combining a few words with the variables that store the player scores.

Now we need to make sure that method is called whenever a goal is scored, and also when the game restarts (i.e. when the score is reset). Find the GoalScored method and add the following line to the very end of the method (before the curly brace, of course):

And in the GameOver method, again at the end, add the following line:

Great. Now the score text changes whenever the scores change in the game!

Try it out. How cool is that?

Since we haven’t yet done anything with scenes, and all games need a menu, let’s create a menu scene/screen.

Save the current scene: menu File | Save Scene.

Now create a brand new scene: menu File | New Scene. Save this new scene (File | Save Scene) in the Scenes subfolder, and name it ‘Menu’.

Add this new scene to the build settings (File | Build Settings, then Add Current). Then, using drag-and-drop, move the scenes so that Menu is before Scene1 in the list:

We’ve now added our scenes to the build settings so they will be included whenever we build a copy of this game. When this game launches from a built copy it will start with the scene at the top of that list, which is the Menu scene.

When you hit the Play button to test your game, it launches the scene you have open. Be aware that sometimes your scenes can rely on actions and data from previous scenes in order to work correctly.

Close the Build Settings dialog and get back to building our menu.

We will add those items to a UI Canvas, just like the way we added score text earlier.

Add a Canvas to the scene: menu GameObject | UI | Canvas.

Add a UI Text component to that canvas and modify its properties to display the game title (you can call it simply ‘Pong’ or come up with your own name) in a pretty large font near the centre of the screen.

See if you can figure out how to add the font included in the assets zip file to make your text look as funky as mine.

Aim for something like this (but feel free to play around – this is your game after all):

Set the canvas to scale with the screen size like we did earlier with the score text.

Because we can only add one Text component to a GameObject, we need to create our byline as a separate GameObject, but we need it to be a child of the UI canvas.

The last thing our menu needs is a button so we can actually start the game.

Here’s what my main menu screen now looks like:

That button might look incredible J, but it doesn’t actually do anything when clicked yet. In the Inspector you’ll notice that the Button (Script) component has an On Click() event list:

This list will hold the action(s) to perform when the button is clicked.

We also need to perform a specific action when this button is clicked, but we need to script that action first.

You should know how to create a script now (if you can’t remember refer back to earlier parts of this tutorial), so I won’t go into detail.

Here is the entire code for MenuButtonScript:

As you can see from the above code, the line Application.Loadlevel(“Scene1”) loads our main game scene, and that’s how you change scenes in Unity via a script. Quite simple.

Hit Play to launch the game.

We’ve come a long way since we created a stationary ball in Part 1!

We’ve now used Unity 4.6’s new GUI features to add a score display to our game, and build a menu screen. We also learned a bit more about scenes, including how to navigate between scenes via the Application.Loadlevel() method.

We’ve now created a (mostly) full game. We’ve learned a huge amount over these eight tutorials about how to use Unity. Everything you’ve learned so far can be used as the building blocks of more complex games. You’re probably already getting ideas about how these building blocks are used in your favourite games and how you can use them in your next project!

This isn’t the end of the Pong tutorials.

Continue to Part 9, where we’ll add further polish to the game and tweak it into a masterpiece!