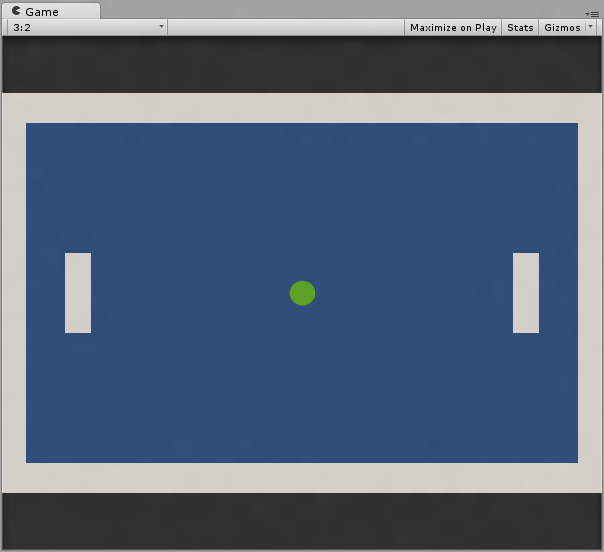 Now that we have a moving ball we need to also move the paddles so we can hit it, and once that is done we have the skeleton of a working game!

We’ll be moving the paddles via a script, and we are also going to be getting player input to move the paddles.

Our Pong will be a 2-player game, with the following controls:

Create a new script (remember to put it in the Scripts folder to keep the project nice and neat) called PaddleScript.

I’ll give you the full script code and then explain what it is doing. Open PaddleScript in MonoDevelop and replace its contents with the following:

Firstly, we have a few variables:

In the Start() method (which runs as soon as the scene starts), we set myTransfrom = transform. This stores a reference to the current GameObject’s transform in the myTransform variable.

We store references to components because it is more efficient than making Unity ‘find’ the components every time they are needed.

We then use the method FixedUpdate(), which is a MonoBehaviour method similar to the Update() method we learned about in Part 4. The difference between the two is that FixedUpdate() is fixed to the physics engine clock, meaning it runs with the same frequency regardless of the device and/or framerate, whereas Update() will run as often as the available computing power will allow. FixedUpdate() is consistent, and all physics calculations should be done there.

In FixedUpdate() we check which player this script instance is assigned to by checking isPlayerTwo. It then checks if the player’s up or down key is being pressed by using Input.GetKey. If one of the keys is pressed, either MoveUp() or MoveDown() is called (see below).

Two simple methods move the player’s paddle up or down by changing its transform.position.y value.

You can’t simply change the transform.position.y value. Instead we create a new Vector2 (a point in 2D space – sort of) with the current X value (we don’t want the paddle to move left-right) and the current Y value plus or minus our speed variable (plus for up, minus for down).

Now you must attach the script to the players.

Test the game in play mode, and it’s now a functioning Pong clone…in a minimal sense. You’ll probably notice the ball moves too slowly, and there is no scoring, and minimal control for the players. We’ll work on those things in the rest of this series.

We added a new script to our paddles, including some new functionality to detect key presses. We learned how to move a transform by changing its position using a new Vector2.

If the scripting is still a bit mysterious to you, have a read through the code, and even try changing a few values to see what happens (you can always re-copy the code above if you break your script).

When you’re ready, continue to Part 6.